“What evil are we burning away by adding pollutants into our atmosphere?”

In October 2016, I had a curious experience about the attitude of Indians towards environment, religion and festivals. Playing at a local park on the evening of Dussehra, a group of 5 kids, the eldest not more than 9 years old, came rushing into the park. They were […]

How does tourism affect the coastal ecosystems?

When you think about going on a holiday, one of the first things that comes to your mind is the beach. Be in Goa, Andaman, Pondicherry, Miami, Sydney or the amazing beaches of France, it seems to attract everyone (63% Europeans prefer the coast as a holiday destination). […]

Coastal ecosystems severely under threat due to climate change

The narrow zones of the world where the land meets the sea hosts some of the most diverse ecosystems in the world. Coastal wetlands, estuaries, backwaters, deltas, lagoons, reefs, bays all come under a broad term called coastal ecosystems. Together, they add up to 1.6 million kilometers. of […]

Landslides account for huge destruction to both life and property. What landslides are and what are the measures one could take to prevent them has been already mentioned here. When it comes to prevention of landslides, a neat relationship between landslide and botany is seen. One of the […]

Geoengineering: Is this the only way to save the world?

With the world slowly but steadily descending into living hell (no, I’m not exaggerating), scientists in the field of environmental science are hard pressed for solutions. There have been many that have been proposed and implemented. Some of which, I have mentioned in my blogs as well: restoration […]

Food for the soul

Today, I spent some time with my soul… Flashback- 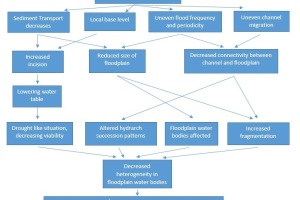 The impact of dams in floodplains

Every ecosystem, at the end of the day, is governed by the environmental factors that exist there. This, I’ve mentioned time and again. How intricate is this relationship? Take a look! One single dam can alter the geomorphic (or landscape or environmental) factors of the entire floodplain. These […]

Ever wondered what happens when you sweep fallen leaves?

As I write this, autumn has just passed us by. Every autumn, we see a spectacle of colors all around us. In most temperate regions, leaves change into many different colors. Then, they fall off. The only irritating thing about autumn is the fallen leaves. It can clog […]

(This is the fifth post in the “feedback loops” series.) Climate is weather, over a long period of time. Unlike weather, climate is predictable. It has a number of factors like solar insolation, rainfall, temperature and latitude/altitude that controls it in a particular place. Also, climate encompasses a […]

Disturbance: Driving changes in the universe

(This is the fourth post in the “feedback loops” series) Imagine a world where nothing interacted with anything. Each entity, molecule and atom remained in isolation. They could not feel or touch each other, directly or indirectly……. That would be a dead world.