This post is part of a blog series written by Priyadarshan Pandey.

Hey there, aquamen (better? Good.)! Welcome back to another blog in this series where I, your buddy H2O, am taking you on an awesome ride of information and fun.

So, in the last post we talked about the nature of aquifers and what defines them. In this section, we will look into the extraction and utilization process and also discuss the challenges to their sustainability.

The most common method of aquifer extraction is digging wells. Wells can be drilled into the aquifers and water can be pumped out. Human beings have been utilizing groundwater through wells for millennia. Depending on the nature of the tapped aquifer, there can be broadly three types of wells. 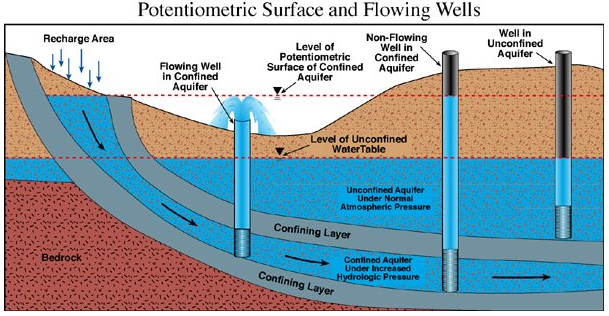 The ground is excavated by digging, drilling or boring to access the groundwater. The aquifers closest to the ground are usually (but not always)unconfined aquifers as they lack a confining layer above them. The water level in such wells, thus, is at the water table (as shown in the right-most figurein the above illustration). The water is drawn out by mechanically pulling up filled buckets or by pumps.

When the confined aquifers are accessed through wells the hydraulic pressure inside the aquifer comes into play. The pressure inside the aquifer due to the confined layers forces the water up towards the surface in the well. This is due to the pressure difference between the aquifer and the atmosphere. The water is pushed up to the potentiometric surface through the well (as shown in the left-most figure in the above illustration. Therefore, the water can be naturally drawn out on the surface if the potentiometric surface of the aquifer lies above the ground level. These kinds of wells are commonly called artesian wellsas it was first in the old Roman city of Artesium in France that this technique was first used in the middle ages.

When the potentiometric surface of an aquifer lies below the ground level, the hydraulic pressure can’t be utilized to draw the water out. The water level, although considerably above the water table, in such wells prevents the water to naturally flow out of the well (as shown in the middle figure in the above illustration. The same techniques of drawing out the water are needed to be applies to utilize water as in the traditional wells, albeit to a lesser magnitude.

Groundwater flow and effects of pumping 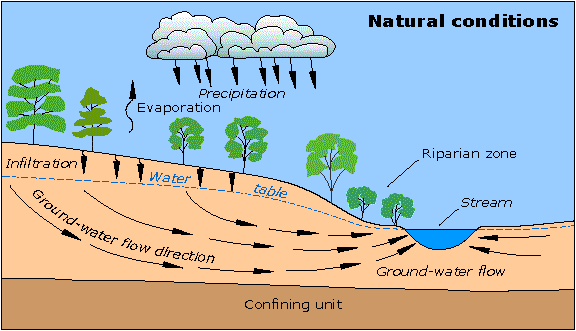 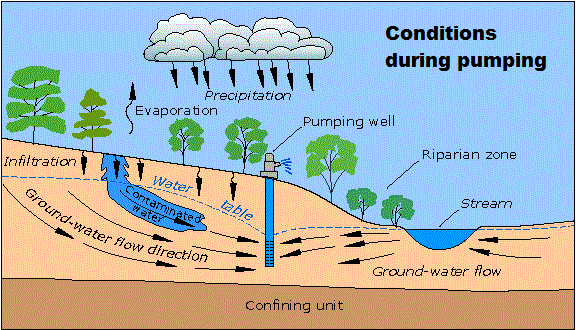 Contaminants introduced at the land surface may infiltrate to the water table and flow towards a point of discharge, either the well or the stream. (Not shown, but also important, is the potential movement of contaminants from the stream into the groundwater system.)

The contaminated water can also be from an underlying source like in the case of saltwater intrusion in coastal aquifers. Saltwater intrusion occurs naturally to some degree in most coastal aquifers, owing to the hydraulic connection between groundwater and seawater. Because saline water has a higher mineral content than freshwater, it is denser and has a higher water pressure. As a result, saltwater can push inland beneath the freshwater. 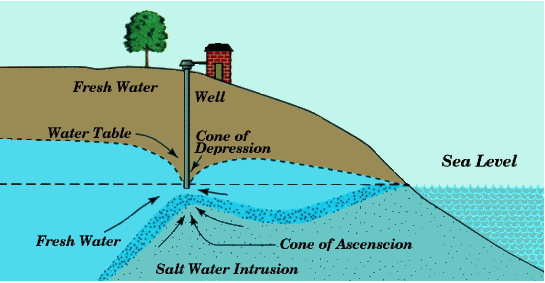 Water-level decline also affects the environment for plants and animals. For example, plants in the riparian (see picture) zone that grew because of the close proximity of the water table to the land surface may not survive as the depth to water increases. The environment for fish and other aquatic species also may be altered, and large areas might face drought like conditions as the stream level drops.

The water stored in the ground can be compared to money kept in a bank account. If you withdraw money at a faster rate than you deposit new money you will eventually start having account-supply problems. Pumping water out of the ground faster than it is replenished over the long-term has caused similar problems. The volume of groundwater in storage is decreasing in many areas of the world in response to excessive pumping. Some of the negative effects of sustained groundwater pumping are:

The world’s largest aquifer, the Ogallala Aquifer, is found underneath the Great Plains of the United States. Before pumping of this aquifer began, it had a water-holding capacity of almost 900 cubic miles, was over 1200 feet deep at its thickest point, and spanned over 175,000 square miles in eight different states.Since pumping of the aquifer began in the 1950s, the total water storage has been depleted by about 9%. The U.S. Geological Survey estimates that about a third of the cumulative depletion of the Ogallala Aquifer occurred from just 2001 to 2008. And, while in recent years there have been many efforts to conserve the aquifer, it will take more than our lifetimes for it to recharge to the volume and size that it once was.

This post was a long one! Hopefully it gave you some food for thought about the challenges towards the sustainability of the (fresh) water resource. We will wrap this series by talking about the opportunities, suggestions and recommendations about the conservation and sustenance of the most important natural resource of all, me.