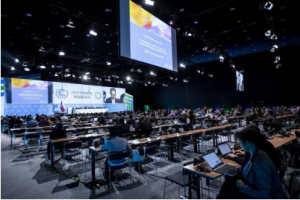 COP24: What the outcomes were and whether they are sufficient

Last week, a much anticipated climate change conference concluded in Katowice, Poland. The conference is critical because 3 years after signing the Paris Agreement, there is finally a working program to operationalize the Agreement. Many people have been talking about the rigor (or the lack of it) of […]

GHG Inventories- a measure to manage

Originally posted on Agenda For Survival:
The Earth’s climate has been evolving since the beginning of time but the manifestations of future catastrophes can now be seen. From frequent earthquakes, drying up of rivers and lakes to the disastrous situation in Kerala, the damage is perceivable.  The situation…

“We’re still pinning our survival on a capitalist system, mainly because it’s a structure we’ve always known, instead of acknowledging our survival in the greater system–the ecosystem.”   To begin, the COP21 Paris Agreement was not legally binding in the slightest. While it may be a great feat for […]