The patches in a landscape are not always connected, like most examples I gave in the previous blog. Often (and increasingly today because of habitat fragmentation), patches are becoming increasingly small and distant from each other. Understanding how this affects the species living in these patches is extremely important for practical applications like restoration of ecosystems and conservation of species. These dynamics are explained fairly well by the theory of island biogeography.

The theory of island biogeography

This landmark theory was proposed by two scientists; MacArthur and Wilson in 1963. Initially, this theory was proposed to explain the distribution and abundance of species living in islands separated by oceans. Soon, the theory found other applications. For example, it was applied to communities living in alpine mountaintops; they are in effect islands isolated by the ocean of space separating them. Similarly, they were applied to cave communities; the conditions separating the cave from the land above was as inhospitable as an ocean.

Once habitat fragmentation in a landscape became a problem that could not be ignored, ecologists happily extrapolated this theory into landscape ecology. The fragmented patches of land represented islands, and the large corridors in between were the “ocean”. 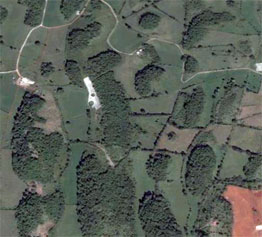 The picture here shows a fragmented forest. As you can see, the patches of forest are spread in a background of grasses just like islands in an ocean.

How does this theory apply to landscapes?

In any area, the species composition is a direct result of two variables; the rate of immigration and the rate of extinction (or emigration). These are the two variables considered in this theory.

In terms of connectivity, the theory says that nearer the islands, greater is the species richness because it allows for easier dispersion among individuals of the two communities (in other words, greater immigration).

The entire theory can be summarized in the graphs below-

This theory has seen vast applications in conservation efforts to preserve biodiversity. Most national parks and wildlife sanctuaries built in the 1980s have strongly relied on this theory for guidance.

In case of places with high possibilities of natural disturbance like fires or floods, it is ideal to have patches of habitat in the protected area. While a single patch would certainly contain more number of species, it would be in great danger of being completely wiped out if a disturbance occurred. If the total species composition was spread between small patches of moderate number of species, patches that have not been affected by the disturbance will be able to recolonize the patches that were destroyed. Hence, smaller but interconnected patches have been proposed for such conservation settings.

It also helped understand the development of endemic species in isolated areas. When a patch become extremely isolated, the immigration rates would be reduced to almost zero.  This would allow the species in that community to evolve and adapt to that ecosystem specifically, leading to specialized adaptations (otherwise called endemism). These species would only be found in that region.

It also explained high extinction rates due to a fragmented landscape. If patches become very isolated, the species would not be able to migrate in times of a catastrophic event (natural or man-made). These species could very easily become extinct.

A highly fragmented landscape also prevented natural migration and movement habits of large mammals like elephants. A highway cutting through a large forest could destroy a natural route for elephants of that forest. Elephants are highly sensitive to such disturbances; it can lead to severe problems within the elephant population. Further, such fragmentation has lead to many human-wildlife conflicts.

In essence, smaller and less connected patches have lead to greater loss in biodiversity. This is the greatest danger of habitat fragmentation caused by human activities.

Is this theory perfect?

No. As with any theory, this theory was also met with severe criticism. In special conditions, the controlling variables of this theory were known to become invalid. For example, if a patch was very close to a large, unfragmented forest, there would be constant movement of species to and fro. Rates of immigration/emigration would too high because of very good connectivity, rendering the size of the patch immaterial. It does not consider the dynamics of the food web in a patch and how that could influence species composition (I have written about how a food web could respond to a disturbance here). The theory also assumes that the patches (or islands) are in equilibrium; this is rarely the case because patches always have frequent disturbances.

This theory is a simplified version of how patches in a fragmented landscape can affect the species composition and the overall biodiversity of the area. Nevertheless, in most cases, this theory holds true.