Extreme adaptations: Organisms can do some crazy things in order to survive!

When faced with an environmental stress, every living being has the ability to alter its lifestyle, its habits, its physiological processes to a certain degree so that it can accommodate that stress and continue to survive. Humans do it too; when it’s cold, the hair on our body stands, trapping air in between them and keeping our body warm. People living in warm climates tend to have less body hair, and generally lies flat against their skin because they do not need this heating mechanism. This is an adaptation to the environmental stress of heat.

But this is relatively a simple adaptation. There are some organisms in the plant and animal kingdom that have gone to great lengths to ensure they can survive in their habitats. In this post, I’m going to share with you some of the most amazing and mind-boggling adaptations that nature has to offer!

It’s a hot summer, and water is definitely difficult to come by in large parts of the world right now. Deserts seem like THE place to avoid, if you are in the northern hemisphere. Water is extremely scarce, but what does the Sand Grouse do? The male birds of this family, found in the deserts of Asia and North Africa, havse the ability to soak up water in its wings like a sponge and carry this water to its nests, where it shares the water with offsprings and female counterparts.

Suicide defense, or autotomy, is widely known among most bees. When threatened, bees sting you and in the process of hurting you, they die themselves. Ever wondered why? Well, in a bee hive, most bees are worker bees that cannot reproduce. So, the best way for them to contribute to their family is to ensure it’s protection. And they do so by giving their life for it. When they feel that they, or their hive is threatened, bees sting you and the sting lodges into the skin of the supposed threat. They cannot retract this sting, so they leave it behind with a part of their digestive tract, muscles and nerves. THIS is what causes their death.

They don’t just stop there; when bees sting, they secrete pheromones from near the sting chamber that excites other bees in the hive, and all of them sting anything that moves close to their hive, perceiving a threat. Pretty extreme, huh?

And so, it dies a heroic death.

But not all bees do this. Some bees like yellowjackets that do not produce honey or are fast fliers have the ability to pull out their stings, or detach JUST the sting and fly off.

It is common knowledge that ants live in huge colonies. Lacking size, they rely on their numbers as well as their ability to coordinate among themselves in order to survive. Predominantly, this coordination is achieved by communicating using special pheremones that distinguish one ant colony from another. But there’s a catch…..

The queen surrounded by her slaves.

Just like it takes human babies some time to learn human speech, ant larvaes cannot recognize its colony’s pheremones until it matures. Once it does, it goes out in order to “imprint” on this scent. Here’s where other ants come in…..

Some species of ants (Formica sanguinea, Diacamma indicum) have the ability to move among other ant species while it is relocating and kidnap the larval ants in the moving confusion by planting their pheremones. These larvae do not know the difference and move off with these “slave-makers” to become slaves of their kidnappers; quite willingly!

It is common knowledge that in the animal kingdom, some amount of sexual dimorphism is present to differentiate between males and females. But the Anglerfish takes it to the next level. See the tiny male attached to the sides?

This fish species that became famous after its Hollywood debut in Finding Nemo has two extreme sexual characteristics. The individuals with the light bulb-like organ over their heads are the females, that attract prey and feed off them. They are massive, in comparison to the males.

The males are, in fact, extremely small and have no way of surviving on their own. So, as soon as they are born, they try to find a female and attach themselves to it by biting into their sides. They release enzymes that dissolve their mouths as well as a part of the female, fusing them together. The males then live their entire (very short) lives by feeding off the females. The males slowly atrophies until all that remains is a pair of gonads, which is released into the female body for reproduction.

Now, if the male does not find a female to fuse with, they either die or grow in size drastically to eventually become……a female themselves. 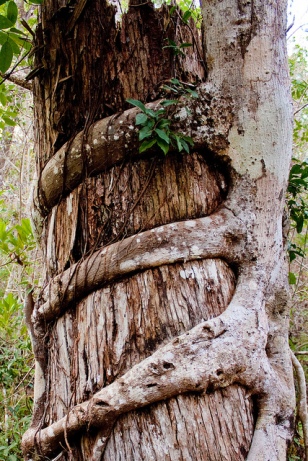 As the fingers close around you, beware, for it may never release you, unto death.

These plants are a slow, loving parasite. Strangler Fig is the common name for a number of tropical and subtropical plant species that grow in light deprived conditions. They envelope their host plants, and grow right along this plant; down to the roots to derive nutrients and up to the canopy to get some sunlight. As it grows and feeds off the host plant, it also grasps the host tighter and tighter….eventually killing it. Who knew that even hugs could be dangerous?

There are many more wacky and amazing adaptations out in the biosphere. Know any that are cool? Comment below!