Drastically different from what pundits claimed when Trump left the Paris Climate Agreement, US has decreased its greenhouse gas emissions over the last one year.

The Energy Information Administration’s report claims that increase in renewables, decrease in coal-based energy and an increase in natural gas usage for energy have combined to cause this drop to its lowest level since 1991. 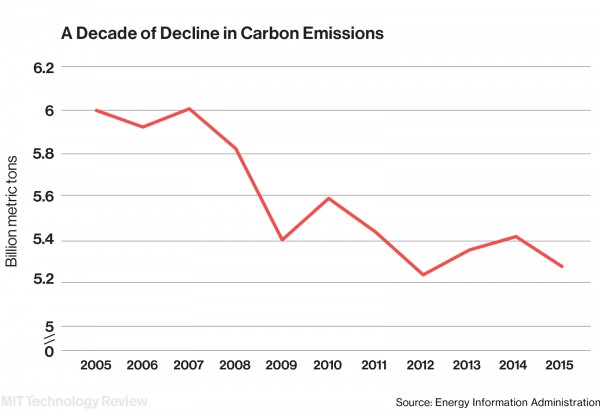 Energy from renewables has increased by 9%, with major investments in the wind energy sector. 10% of this increase has been in solar power plants. The major contributor, according to many, has been the fracking revolution and the use of natural gas for energy demands. Natural gas is a much cleaner fuel and burns completely, leading to lesser greenhouse gas emissions as compared to coal, petrol and diesel.

This decline has caused the per capita emissions in the US to drop to a 67 year-low, to 15.8 metric tons per person, according to Investors Daily.

Meanwhile, energy consumption and emissions in the European Union has risen over the same period by 1.5% last year. This comes as a bit of a surprise, since EU has been very stringent and serious in their aim to reduce emissions and have posed some strict regulations regarding the same.

It is unfortunate that many green groups have failed to acknowledge or cover this development (a simple Google search will show you this). While switching to renewables is definitely the best way to go, we are far from achieving that for all of our industrial processes. Small switches like from coal to natural gas can go a long way in reducing our emissions while giving industries time to switch from conventional methods to newer technologies.

Personally, I think this is a great development, although this shouldn’t be used to justify deregulation of a number of environmental laws pertaining to air pollution and human health. As emissions reduce, the US should also focus on ensuring that protected areas remain protected and unnecessary deregulation for the purpose of industries do not take place. Natural forests and ecosystems continue to remain vital (also see).