This is the second post in the water series, written by Priyadarshan Pandey.

If you’re anything like me, you love the universe and are fascinated by its size and lore. To quote the great Douglas Adams,

“Space is big. Really big. You just won’t believe how vastly hugely mindbogglingly big it is. I mean you may think it’s a long way down the road to the chemist’s, but that’s just peanuts to space.” – Hitchhiker’s Guide To The Galaxy

It is filled with mysteries beyond our understanding (yet) and energy so destructive it is spectacular. It must really make one consider his/her place in the universe, right? I’m genuinely asking. You see being the awesome work of nature that I am, I have never worried about my cosmological insignificance. 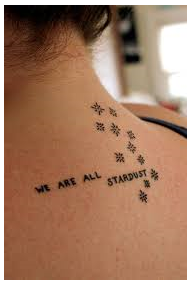 You humans might try to reassure yourself of your worth by tattooing we are all stardust on your back but I literally AM stardust. So yeah, we’re going to talk about my place in the universe today.

We (presumably) know how the universe came into being. An infinitely small point of energy, known as singularity, exploded in a big bang spewing energy away faster than the speed of light. The energy then transformed into matter (E=mc^2 folks) when the temperature got low enough, and formed the first fundamental particles. At around 3 minutes after the Big Bang the first atoms were formed. Hydrogen and Helium they were, the first neutral atoms and the early universe (and the present, to an extent) was dominated by them.

The first stars were formed by the collision of these atoms due to the gravitational attraction and the subsequent nuclear fusion. Nuclear fusion, for the uninitiated, is when two atoms come together to form a larger nucleus (thus a higher mass element). For example, two hydrogen atoms coming close enough to react and form a helium atom. The process releases copious amounts of energy which is what keep the stars on.

Nuclear fusion continuously occurs in the stars. 90 per cent of a star’s lifetime is spent fusing hydrogen into helium. Once the hydrogen is used up, helium begins fusing and one of the by-products of that process is oxygen. Depending on the mass of the star, all the heavy elements up to iron can be created in succeeding fusion reactions or nucleosynthesis. The higher mass elements formed sink into the star’s nucleus and stay there until its death.

There is something inherently peaceful and assuring about life from death. For millennia humans have used this allegory in their greatest literary creations. From the biblical flood and Noah’s Arch to a phoenix’s birth from its own ashes, humans (and I) have found this notion very alluring. And it is no wonder why, everything that you see around you was at one point or another was a part of the star which was spilled out in an explosion when the star died.

Once iron is formed in the core of these stars, there are no further nuclear reactions that are stable enough to fuse the iron. Without, the output of energy to balance the star’s inward gravity, the star collapses upon itself, leading to its destruction in a supernova explosion. (By the way, a supernova is as bright as an entire galaxy!)

A supernova remnant formed from the exploded star expands outward and eventually all the elements within it are spread throughout the galaxy and mix into the region between the stars (the interstellar medium).

Over time, denser regions of the interstellar medium form into giant interstellar clouds of gas and dust. These clouds are stellar nurseries in which numerous stars will be born. Around each star, residual gas and dust slowly congregates and forms into planets.

But we’re here to talk about me. So we saw that lighter elements give rise to heavier ones, which includes oxygen. When the star explodes, these elements are spewed out into space. At favorably low temperature oxygen and hydrogen combine to form H2O; me.

Place in the Universe

Space is large, and space is cold. The coldest temperature on earth is a lovely summer in the outer space. So, my most common state in the universe is solid (ice). Given that of thousands of kelvins of the temperature range, I am liquid for just 100 (273-373K) you should really be thanking your stars (pun doubly intended) that you’ve got oceans full of me.

As ice, though, I can be found almost everywhere else in the universe. Studies have shown that large ice caps are present on the craters of the moon, and at the poles of Mars. Jupiter’s moons- Europa and Ganymede, and Saturn’s rings also have water present as ice.

The presence of riverine structures on the surfaces of Venus and Mars indicate the presence of liquid water in the past. Scientists believe liquid water is present in the Saturnian moons of Enceladus, as a 10-kilometre thick ocean approximately 30–40 kilometres below Enceladus’ south polar surface, and Titan, as a subsurface layer, possibly mixed with ammonia.[51] Jupiter’s moon Europa has surface characteristics which suggest a subsurface liquid water ocean. Liquid water may also exist on Jupiter’s moon Ganymede as a layer sandwiched between high pressure ice and rock.

Based on models of the formation and evolution of the Solar System and that of other star systems, most other planetary systems are likely to have similar ingredients.

I am also present in interstellar clouds within the galaxies too. An international team of astronomers has recently (well in 2011, but then even the birth of Jesus is recent for me) discovered the largest, oldest mass of water ever detected in the universe. The newly discovered cloud of water vapor, equivalent to 140 trillion times the water in Earth’s oceans, is more than 12 billion light-years from Earth and surrounds the huge black hole of a quasar. Only need a tessarect to tap into a seemingly infinite source of me.

Well, there you have it. A brief history of mine. In the upcoming posts we’ll focus more on the local way of things. Till then, be hydrated, be well.