Hydrogen has been a common fuel for rockets. It’s a clean fuel that burns completely and releases only water vapor as a byproduct. However, the gas as a fuel was too expensive to be put to use for day-to-day activities. Neither did it have the technologies to compete with the existing and cheap technologies of the petroleum industry. All that is about to change…

In a world’s first, Germany has come up with a passenger train fueled by hydrogen. The train is not operational yet; it is expected to start plying by December 2017. The train, called Coradia iLint passenger train, is being spearheaded by the French Transit company Alstom. The train is supposed to carry hydrogen tank on it’s roof, which powers the fuel cells to produce electricity. The train, at the moment, has enough storage for a 500 mile (approx.) journey and can reach a top speed of 87 miles per hour (close to 142 kmph). 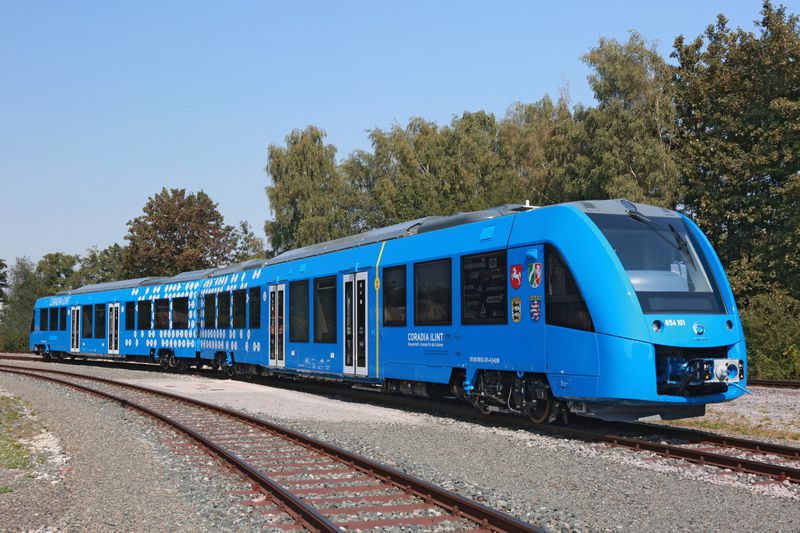 While this train is going to be covering very short routes mostly in obscure places, it is a bright sign for the future.

Is this the first of such trains?

Not really, no. Hybrid trains combing hydrogen fuel cells with other forms of fuels like electric lines and diesel trains have been conceptualized in the last few years, most notably in Japan. Prototypes have also been made. Such trains have been nicknamed “hydrail”. In fact, a small scale railway system in the Caribbean islands started running on fuel cells in 2012, but this was without passengers. The German train will be the first large scale, passenger carrying hydrogen-powered train.

What does this mean for the environment?

Our first impulse will be to celebrate the fact that we are moving towards a greener rail travel! This is partially true. Most trains in the world are powered by diesel engines, which burns and directly powers the engine or else, converts into electricity which in turn powers the train. The hydrogen fuel cell-powered engine will completely remove the dependency of the railroad on fuels that can even remotely pollute the environment.

The byproduct of this form of energy generation is steam and water. Largely, this is a good sign for the environment. Diesel combustion releases particulate matter of different sizes into the air, and these particles are known to cause many respiratory diseases, apart from conditions like smog. While steam could be a potential greenhouse gas in the immediate locality, it will probably be quickly incorporated into the water cycle.

Where is this hydrogen being sourced from? That’s a good question, and this is probably the biggest positive from this initiative. Hydrogen for this train is being taken from the waste products of the chemical industry. Till now, this waste hydrogen has been burnt away from nothing. We now have a reliable and useful way of using that waste product. These trains, unlike most trains will be carbon neutral (neither releasing or using carbon).

Of course not. This idea and the associated technology is in its nascent stages. Not to mention, it is also very expensive. But the hue and cry of climate change is forcing us to look for alternatives to the diesel engines, and people are ready to invest in this technology. Soon, the cost of production and travel will fall. Alstom has not released the specific costs of travelling in this train, but they expect it to be “comparable to diesel trains.”

One of the biggest dangers in this form of transport is that hydrogen is extremely inflammable. If there is even the slightest of sparks, the whole train is going blow up. I mean, BLOW UP. Safety is a big concern and this is the first thing manufacturers need to look out for.

The train is also slow at the moment. In a world that needs speed in everything, a slow train isn’t going to help people’s tempers or patience with this technology. European trains are known for their speed and this train needs to become comparable with the diesel trains on that front as well.

The byproducts, steam and water, is a potential resource that can be harnessed from such trains. In spacecrafts, the water released after hydrogen combustion is used by astronauts for their needs. If we could do something similar here, it could remove the “water is vapor is a greenhouse gas” argument.

Also, people need to give this tech some time. One failure or accident (which will happen sooner or later) shouldn’t mean you shelf this idea. It’s worth investing in. If rockets can travel with this fuel, it’s got to be good enough for you.