Landscape ecology has evolved specifically because of certain phenomena that are unique to the scale at which it is viewed. One such phenomenon is the variation of vegetation along a gradient. This gradation is central to the vegetation continuum concept, which seeks to explain that presence or absence of a species in an area has as much to do with the environment as much as it has to do with its relationship with other species.

This concept was proposed and worked upon by Whittaker and Curtis in the 1950’s. As opposed to the prevailing individualistic concept, which said the a species is found in an area independent of other species, vegetation continuum believed that species are present because of their relationship with other species and also with the environment.

These two scientists came to the conclusion that in most landscapes, environmental factors like temperature, elevation, pH, CO2, etc. do not change sharply. Instead, they gradually shift from one value to another. This gradual change is called an environmental gradient. Along this gradient, even vegetation changes gradually, and does not have sharp boundaries.

They termed the gradual change in species composition along the environmental gradient as “vegetational gradient“, also called ecocline.

What is an ecological gradient?

The environmental gradient, together with changes in species composition creates an ecological gradient. Both, abiotic and biotic factors change as we move across the landscape.

For example, let us take an elevation gradient. If we were to go up the side of a mountain, the elevation gradually increases. Along with this, there is a corresponding change in the vegetational composition (and as a consequence, the animal life as well). 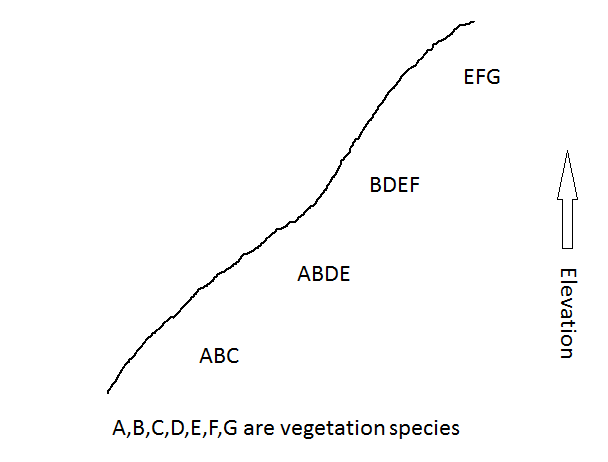 When we study the changes in environmental factors and the associated species composition across the landscape, it is called an ecological gradient analysis.

Why is ecological gradient analysis important?

Over a landscape, the environmental gradient explains what determines the species composition.

Fun Fact: The Climax-Pattern Hypothesis was proposed to validate the presence of multiple climax communities based on different environmental gradients over space.

When you put together multiple environmental gradients over any landscape—be it a mountain slope, an alluvial plain or a forest—all of them together determine the environmental conditions that an organism will have to tolerate. This forms one-half of what an organism needs to adapt to. The other half comes from the responses of different organisms to the same environment, thus creating a thriving community.

The presence or absence of an organism in any ecosystem is determined by the sum of abiotic and biotic factors.

If along a desert landscape, a rodent decided that because of the present environment gradient of temperature, it prefers to stay burrowed during the day. This will force the rodent’s predator to also alter its activities during the day, so that it can hunt in the night. This is just an idealized example, taking into consideration one gradient. But you can see how, with multiple gradients, the habits of a population or even a community could be dictated. Eventually, it determines the composition of the community.

Can this be studied?

Absolutely. In fact, this concept has gained popularity because it has been validated by ecological studies along a gradient. Such studies are called gradient analysis. Among other things, a gradient analysis can also involve the study of species diversity across a landscape, by considering alpha, beta  and gamma diversity. It is central to ecological studies that seek to understand changing community compositions.

Today, this field is of special interest because of the landscape effect of climate change. Ecological gradient analysis are conducted and modeled to understand how specific climactic factors are affecting community composition along a gradient. It is also used to assess distribution of species along these gradients.